About the Lakeview Bird Case 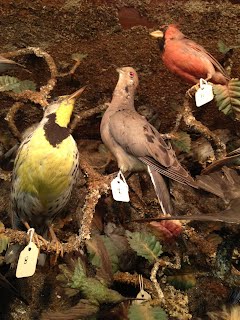 Did you know we have a beautiful case of stuffed birds in the entryway to the school? One March each student studied one of the birds from the case. We had a school wide kick off to get started. Students drew an egg from a basket to find out which bird they'd be studying. Along the way a variety of guest speakers were lined up, a bird walk planned, and a field trip in May.

William Massey donated this bird case. William Massey’s wife Loretta had an unmarried brother — Robert John Cassavah born 1899, died 1971.  It is said he is the one who assembled this display.

Some of the birds in the case may have come from museums (extra specimens are often auctioned off.)

Of note, the passenger pigeon became extinct in 1900.

This bird case hung at the lower building also until 1968 when Greensboro closed the town high school and joined Woodbury and Hardwick to form Hazen Union.

The case was then installed here in the Greensboro Elementary School, now Lakeview Union School (the towns of Stannard and Greensboro formed this union in 1985/1986.)